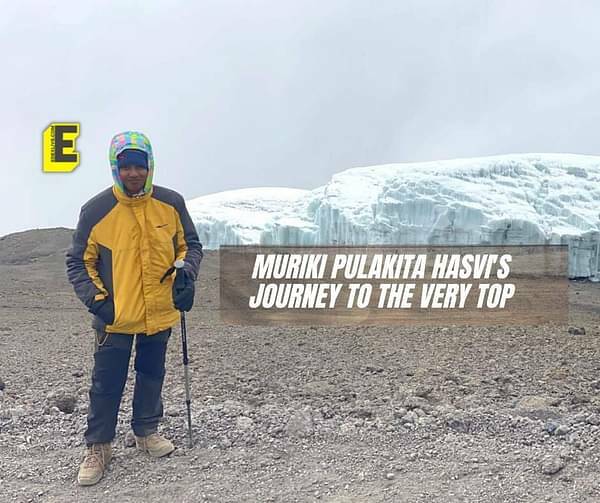 Badminton had made Muriki Pulakita Hasvi agile and fast, but when the 13-year-old shifted gears and turned to mountaineering, she needed a completely different set of skills. She needed consistency and stamina. As a sportsperson who was already aspiring to play at the district level, she had started working on her body and worked really hard. A little bit of philosophy that she picked up on the way helped too.

With the advent of New Year 2021, Hasvi started nurturing her newfound passion. Fitness classes with Boots & Crampons (the adventure company), long-distance cycling, running and gym time — all of it seems to have served her well because, in April, she trekked to the Everest Base Camp with the same adventure company she trained with. "It was during this trek that I discovered my weak point, we were covering two days worth of distance in one, walking for as many as 13 hours. I understood the importance of consistency in mountaineering," says the student of Excellencia Infinitum School, Hyderabad. And while working on her weak points, she set her eyes on Mount Kilimanjaro in Tanzania and early in October, managed to scale that as well.

Picture this: Seven layers of jackets and waking up at 1:30 am to walk for 16 hours with nothing in the stomach. This was how Hasvi's last day of trekking Mount Kilimanjaro began. "For the first three hours, I did not eat anything. But I kept motivating myself and had protein bars to feel better," says the Class IX student. The teenager hopes that she is able to scale all the seven summits before she turns 16 and become one of the youngest mountaineers to scale them. "Mountaineer!" she exclaims, her otherwise calm voice switching to a higher pitch suddenly. "I don't know if I can call myself that yet, but I do love them. They have a certain spirit in them," she says profoundly. Okay... so now that Mohammed has come to the Mountain, has it turned her into a philosopher? She outright laughs, then turns silent to think and proceeds to answer slowly, "I think...it teaches you that decisions matter. I remember when I was on my way to the Everest Base Camp, three people decided to quit and go back. I had to decide, at that very moment, and then decide with every step if I would like to climb or quit. It's all about decisions." Sounds like life, we say!

Hasvi is working long and working hard on her hamstrings now, so that Mount Kosciuszko in Australia, if it opens for tourists, is kind to her. She has also infused meditation into her routine recently to help with building mental strength. Sounds like a lot of work, does that mean there is no play in her life anymore? "I do miss out on meeting friends because every minute of free time goes into catching up with studies. But if you want to achieve something, you've got to leave something behind," says the teenager. Aha, so the mountains have turned into a philosopher! Here's hoping they turn her into the best version of herself too.